Are you ready to learn?
Why do homework? How can parents and guardians help?
What time is it? When are my units and coursework due?
Today is Monday May 10, 2021 at 00:58. Today is a great day to be alive! 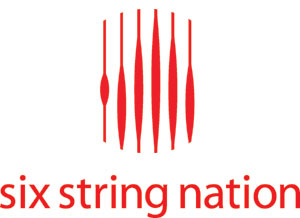 Six String Nation is a story about Canada told through the strings of one very special guitar - a guitar made from wood, bone, steel, shell and stone representing every province and territory of Canada.

Six String Nation is: • a Music Documentary Television Series • a Live Concert Music Television Special • a Series of Radio Features • a CD • a Groundbreaking Rich Media Website • an Educational Project • a Heritage Project and much, much more.

The richness of our musical heritage tells the story of who we are as a nation. In Six String Nation, the storyteller is a specially handcrafted guitar given voice by fifteen songs commissioned from artists across the nation. And like any good song, these voices collectively inspire us all to sing along.

With Six String Nation we will bring together: • materials from across Canada into a single guitar • Canadian musical talent through one instrument • Canada’s diverse cultures through a common project • established stars of Canadian music with emerging ones • regional identities into a national focus • traditional media and new media • culture, technology, entertainment and education 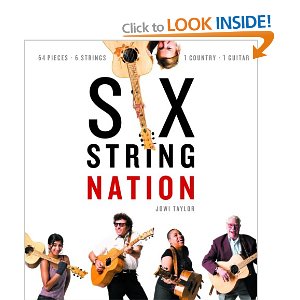 TORONTO (CP) - Jowi Taylor spent more than a decade assembling a collection of quintessentially Canadian artifacts that define us as a nation:

And when he finally found them, Taylor had the treasured icons torn apart, chopped up and mashed together until they bore no resemblance to their original forms. 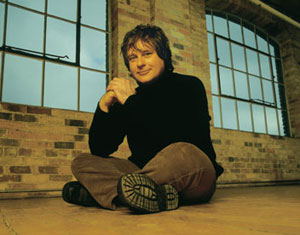 The result was the Six String Nation Guitar - a uniquely Canadian instrument made up of symbols and stories from sea to sea.

The honey-coloured acoustic with the stylized Maple Leaf makes its debut performance in Ottawa on Saturday in the hands of Ontario singer-songwriter Stephen Fearing.

"In Canada we tend to think that we only have room for a certain number of stories," says Taylor, who funded the project with his own bank account before finding private donors in March.

Rizsanyi built the guitar in his workshop near Pinehurst, N.S.

There's not one part of the instrument - inside or out - that doesn't reveal a piece of Canada's history.

Most of the front piece is cut from the Golden Spruce - a majestic 300-year-old tree revered by the Haida-Gwaii of British Columbia and cut down by a madman in 1997.

The guitar's neck is a laminate of several pieces including the Bluenose, a bagel shibba (used to move bagels in and out of brick ovens) from Montreal, and oak from the St. Boniface Museum in Manitoba, the building in which Louis Riel went to school. 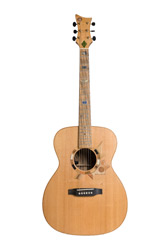 The pick guard - a Maple Leaf in three parts - is stained with red ochre from Newfoundland and includes part of the homes of basketball inventor John Naismith and John Ware, a respected black cowboy who died just days after Alberta became a province of Canada in 1905.

The leaf stem is made up of one of Henderson's hockey sticks, a Wayne Gretzky hockey stick and a seat from the Montreal Forum.

Unseen inside is a piece of wood from Fan Tan Alley, Canada's first Chinatown in Victoria; Nancy Greene's childhood skis, and one of Trudeau's canoe paddles.

"The actual physical guitar is maybe even less important than what it's made of and what it represents," says Fearing, who will play his song The Longest Road before passing the guitar to Colin Linden, Tom Wilson and other musicians during the Canada Day performance.

Who is Jowi Taylor ?

Jowi Taylor is a Toronto writer and broadcaster with over 20 years of experience in radio and a decade in live event production. His radio escapades include a long and varied tenure at listener-supported CKLN FM, a stint at the ultra-commercial WNSP 107 in Bangkok Thailand and finally at Canada's national broadcaster, the CBC, where his programme Global Village is currently entering its 6th year. Jowi is also the host and co-producer of an innovative 8-part radio series for CBC called The Wire - a series about the relationship between electricity and music.

Born in Kampala, Uganda, Jowi saw large parts of Africa and Europe from the back of a 1962 VW Beetle before he could talk. Once he did learn to talk he started talking a lot about travel and music.

After a decade at CKLN community radio in Toronto, Jowi spent a year living in Thailand, where he hosted a daily programme at WNSP 107 in Bangkok, as well as establishing that city's first weekly worldwide music show.

He knows the composing side of music as well, having written music for film and television with collaborator Gord Nicholson as Catastrophe Theory. In 1994, the duo was commissioned to compose original music for the Canada Day fireworks display at Harbourfront Centre in Toronto.

Jowi also spent 10 years working as a festival co-ordinator, as well as writing freelance articles on music and popular culture. View photos of teachers with the Voyageur Guitar.