Are you ready to learn?
Why do homework? How can parents and guardians help?
What time is it? When are my units and coursework due?
Today is Monday May 17, 2021 at 02:43. Today is a great day to be alive!

A Gathering: Peel's Aboriginal Celebration is a one-day festival celebrating the heritage and culture of Canada’s Aboriginal Peoples. A Gathering is organized by Region of Peel Children’s Services in partnership with the Peel Aboriginal Steering Committee (PASC).

Canadian Aboriginal Festival hosted at the Copps Coliseum and Hamilton Place Theatre, Hamilton, Ontario. The festival includes the Canadian Aboriginal Music Awards, Education Day, amateur Lacrosse Skills Competition, music and performing arts venues, traditional foods, excellent shopping and information at more than 250 booths and the centerpiece of the festival – Canada’s largest Pow Wow. The Pow Wow attracts over 1,000 dancers from every corner of North America. The Pow Wow starts with a Grand Entry when all dancers dance into the dance circle in full regalia to the beat of the drums. The motion, colour and sound of the Grand Entry is spectacular and for many visitors, emotional. In addition to the dancers, veterans, both Aboriginal and non-Aboriginal, Elders, Aboriginal members of the armed forces and various police organizations and others also participate in the Grand Entries. Theme of the Pow Wow will be “Saluting Our Warriors”, past and present. The Canadian Aboriginal Festival is organized and coordinated by Indian Art-I-Crafts of Ontario, a non-profit Aboriginal organization located in Brantford, ON. In addition to the 15 years of the festival, Indian Art-I-Crafts of Ontario has been active in numerous local, provincial and federal Aboriginal events over the past 20 years.

The Gathering of Nations

Grand Chief Henri Membertou 400th anniversary marks the baptism of Grand Chief Henri Membertou. He was a man who shaped the faith of his people and the fate of a nation. Beloved by his followers, feared by his enemies and reverentially-admired by all who knew him, he was Grand Chief Henri Membertou, prophet, leader and legend. On June 24,1610, in the moon of good fishing, he became the first person to be baptized in the Dominion of Canada. This solemn act signaled the Mi’kmaq’s desire for peace with the European nations and established a holy alliance between the Mi’kmaq nation and the Catholic Church; a relationship that continues to thrive in Mi’kmaq communities four hundred years later. 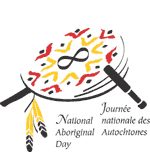 Activities for National Aboriginal Day from The Elementary Teachers' Federation of Ontario (ETFO).

This article is a stub. You can help us improve the quality and accuracy of this article by sending us your ideas. If you would like to modify this page or have an item on this page removed, please contact us. To link to this page from your web site, social networking site or e-mail message, use the byline "From David Spencer's Aboriginal and Environmental Education Circle <http://aboriginal.davidspencer.ca>."