Are you ready to learn?
Why do homework? How can parents and guardians help?
What time is it? When are my units and coursework due?
Today is Tuesday June 15, 2021 at 18:06. Today is a great day to be alive!

Back to the Future 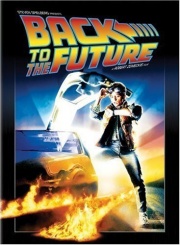 "Back to the Future" movie

Back to the Future

"Back to the Future" is a movie with an enjoyable introduction to the American culture of 1985 and 1955. History students will notice similarities and differences in urban life, slang terms, automobiles, transportation methods and teenage culture of the two eras. Through the modified time travelling DeLorean DMC-12 sports car, students will see a number of locations where the movie was filmed in California, U.S.A. In the film, 88 mph is the speed at which the DeLorean activates the time machine.

Hill Valley is the fictional California town that serves as the setting of the Back to the Future trilogy and used for four different time periods (1885, 1955, 1985 and 2015) as well as in a dystopian alternate 1985. The Hill Valley courthouse can also be found in the movies Bruce Almighty, Gremlins, Bye Bye Birdie, Sneakers, The Offspring's music video "Why Don't You Get a Job?", an episode of Major Dad entitled "Whos That Blonde" and even in an episode of Buffy The Vampire Slayer.

"Back to the Future" was the highest grossing film of 1985 and became an international phenomenon, leading to two sequels which were filmed back-to-back and released in 1989 and 1990 respectively. The trilogy incorporates comedy, relationship studies and time-travel.

"It is the year 1985. Marty McFly, a mild-mannered high school student, stopped by Dr. Emmett L. Brown's laboratory to play around with an amplifier. Then he receives a message from Doc that he needs help from him for Doc's latest invention, a time machine made out of a DeLorean sports car that can travel through time instantaneously when it reaches a speed velocity of 88 MPH. Then, Doc was gunned down by Libyan Nationalists, Marty makes an effort to escape from the Lybians by using the time machine. Then Marty accidentally warps himself into 1955. Where he meets both of his parents when they were teenagers, then Marty unintentionally interrupts his parent's first meeting together, he then finds a younger version of Doc and together they try to find a way to get Marty's parents-to-be back together, and to get Marty back to 1985." - Written by John Wiggins