Are you ready to learn?
Why do homework? How can parents and guardians help their child with their school responsibilities?
Quizzes and Glossaries for Students and Teachers What time is it?
Today is Wednesday January 26, 2022 at 17:19. Today is a great day to be alive!

Add Your Tribute to Kirk Wipper 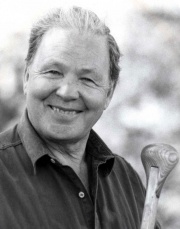 (A.W., C.M., O.Ont. K.S.J., B.P.H.E., B.S.W., M.A., M.Ed., D.Mus. Principal and Chancellor, Professor Emeritus, Retired Professor at the University of Toronto and Founder of the Canadian Canoe Museum. Recipient of the Order of Ontario and the Order of Canada)

Friends will be received at Keene United Church from 2 - 8 p.m. Friday and from 10:00 a.m. -11:00 a.m. on Saturday. A memorial service will be held at the church, at the corner of Second and North Streets, Keene, Ontario on Saturday, March 26th at 11 a.m. Inturnment at Parklawn Cemetery at a later date.

If desired, memorial donations to the Kirk Wipper Foundation In Trust, The Canadian Canoe Museum, or Keene United Church would be appreciated and can be made at www.CommunityAlternative.ca or by calling Community Alternative Funeral Home at 705-742-1875" 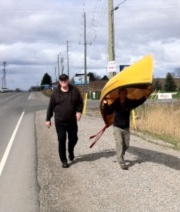 A True Canadian Portage in Honour of Kirk Wipper

More details can be found at www.kirkwipper.ca.

View photos from the section that David Spencer walked of the A True Canadian Portage. 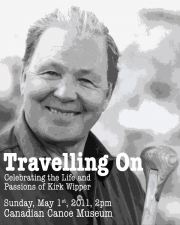 Travelling On event at the Canadian Canoe Museum

Travelling On: Celebrating the Life and Passions of Kirk Wipper

Kirk Wipper wrote the forward or contributed to the following books.

Camp Kandalore located near Dorset, Ontario is the original home of the Canadian Canoe Museum. Kirk Wipper purchased Camp Kandalore around 1955 and directed the camp for many years.

@kandalore "It is with heavy hearts we must announce that last evening, former owner and director of Kandalore, Kirk Wipper"... http://fb.me/xKMDLFDW March 19, 2011

"Having been introduced to OEE through Camp Kandalore and one Kirk Wipper many moons ago, I have become a great lover of rivers. I am captivated by the wonderful variety of experiences they present to the canoeist: the ebb and flow of a multi-day journey (I know, rivers don’t usually “ebb”), the variety of landscape presented, the joy of shooting rapids, the infinite pleasures of campsites by running water and the companionship of kindred spirits." - Grant Linney (November 2009)

"Kirk Wipper, who created a lot of the interest in modern tripping as director of Camp Kandalore in the postwar years (and had, at one point, a fleet of 135 canoes), goes further: "A camp is not a camp unless it relates seriously to teaching about the natural world." And the canoe, he insists, is the key to unlocking the secrets of the wilderness. "It paddles like a leaf on the stream," says Wipper, describing the native birchbark canoe, which has the lightest touch of all. Canoes are familiar, too, in the northern United States, but Canada, says Wipper, "has led the way." Ontario in particular is classic canoe territory, with thousands of lakes linked by streams and rivers that can be portaged."

"On November 18, 2010, at the Society of Camp Directors’ fall dinner meeting, Joc Palm, the 2007 Ron Johnstone Lifetime Achievement award winner, presented Kirk Wipper with this prestigious honour for 2009. Kirk is surrounded by former winners, left to right, Jane McCutcheon (1995), Joc Palm (2007) and John Jorgenson (2002). In front is Mickey Johnstone, the widow of Ron Johnstone whose passion for and contribution to camping in Canada, inspired this award. "

"Kirk is recognized as a pioneer in the development of outdoor education in Canada. In the 1950’s, he began collecting canoes and kayaks at his boys’ camp, Kandalore, in Haliburton, Ontario. His collection was moved to Peterborough and on July 1, 1997 the Kanawa International Museum of Canoes, Kayaks and Rowing Craft opened. It presently houses the world’s largest collection of water craft. Kirk’s love of camping, tripping and canoeing lives on in this unique museum. Kirk is a recipient of the Order of Canada." 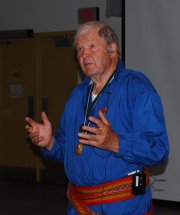 The Canadian Canoe Museum was founded by Kirk Wipper as the Kanawa International Museum of Canoes, Kayaks and Rowing Craft, the world's largest collection of water craft. He built an outdoor museum and housed many canoes at Camp Kandalore in log cabins. The collection was assembled from 1957 to 1990 by Professor Kirk Wipper to preserve a vital part of Canada's heritage, with the archives located locally at Trent University. The first canoe in the collection was a basswood dugout from 1860, one of a pair carved by the Payne Brothers of Peterborough County.

Today the Canadian Canoe Museum is located in Peterbough as a unique national heritage centre that explores the canoe's enduring significance to the peoples of Canada. Experience the world's largest collection of canoes, kayaks and paddled watercraft and learn how the canoe has defined the Canadian character and spirit. Spanning the country from coast to coast to coast, the museum's outstanding artifacts will let you "See Canada by canoe!"

Trent University Library holds a fonds about the Canadian Canoe Museum here. This collection consists of articles and research notes written by Roberts and Shackleton who wrote a canoe history entitled "Canoe". There are also photographs (for "Canoe") and correspondence regarding the Museum; Kirk Wipper's collection of canoe related articles and correspondence and minutes of the Kanawa and Trent/Kanawa Boards of Directors; and the records and correspondence which were collected by Michael Ketemer who was the Haliburton site manager of the Canadian Canoe Museum.

Kirk Wipper was a co-founder in 1971 of the Canadian Recreational Canoeing Association now called Paddle Canada.

Paddle Canada was derived from the need of recreational paddling enthusiasts from across Canada to co-ordinate the efforts of non-competitive canoeing and kayaking. Paddle Canada currently represents over 1,500 Individual Members, 8 Regional Member Associations and 2 Affiliate Member Associations. Through each of our members and programs we are able to successfully and consistently deliver the message of safe and enjoyable paddling to more than 50,000 paddlers annually.

From August 8 to August 23, 2008, the Rails End Gallery & Arts Centre in Haliburton, Ontario featured "Kirk Wipper's Paddle Collection" comprising of 16 artist made paddles from the collection of canoe icon, Kirk Wipper. The display was in the Lower Gallery. Kirk Wipper also gave a public talk during the exhibition.

Fiddlers on the Trent

Kirk Wipper participated in the 2010 "Saturday morning Fiddlers on the Tren canoe run brings musicians and canoe enthusists together for a water-born parade. Music will fill the canal waterway as Parade Marshal, and one of the last of the living canoe legends, Kirk Wipper, leads the paddle in his 10-seat Montreal Voyager Canoe. Wipper, an Order of Canada recipient and former University of Toronto Professor, has dedicated many years to his canoeing passion. His donation of over 600 canoes from his personal collection began the Peterborough Canoe Musuem." Source: Fiddlers on the Trent

"Kirk Wipper, founder of the Peterborough Canoe Museum, leads a waterborne charity parade of music down the Trent Saturday Morning. Complete with fiddles, bagpipes, guitars and canoe enthusiasts alike, the event invites everyone to Paddle for Poverty on the picturesque waterway. Join us with your canoes, kayaks, pontoons and pledge forms by 9:00am at Cooke-Armstrong Road in Glen Ross (follow the signs from the Tourist Park). " Source: Fiddlers on the Trent

Duke of Edinburgh Awards in Canada

Kirk Wipper was a National Director of the Duke of Edinburgh Awards in Canada.

View the numerous newspaper articles that have been written about Kirk Wipper over the years.

Kirk Wipper received Order of Canada in 2002. He dedicated his life to promoting and preserving the canoe as a symbol of Canadiana. Over a 45-year period, he collected more than 500 canoes and kayaks which now form the greater part of the exhibits at the Canadian Canoe Museum in Peterborough. A retired professor of physical education and health at the University of Toronto, he has received numerous honours for his contributions to the University and to conservation. Known as a man of vision and determination, he has helped, in his many endeavours, to bring alive the history and culture of our nation. http://www.gg.ca/honour.aspx?id=7412&t=12&ln=Wipper

Kirk Wipper was a President of the Royal Life Saving Society of Canada.

Kirk Wipper was the Chancellor and Principal of TAIE International Institute.

Kirk Wipper graduated from the University of Toronto specializing in Physical and Health Education, 1948; Social Work, 1950; Master of Education, 1959 and Master of Arts, 1961. He was inducted in 1991.

Kirk Wipper has made a major contribution to Varsity athletics as a student-athlete, coach, teacher and administrator. He was captain of the Wrestling team, undefeated in individual competition, helped the Blues to win 3 league championships and later served as coach for 6 seasons. He also had extensive intramural participation for University College and PHE.

Wipper joined the Faculty of the School of Physical and Health Education in 1950, and his active involvement with Varsity athletics included service as faculty supervisor of Rugby and Track and Field, and coach of Blues Cross Country team. He was Chair of the U of T Athletics Council from 1983-87 and received the Loudon Award in 1987.

Recognized as a pioneer in the development of outdoor education in Canada, Wipper founded (1955) the Kanawa International Museum of Canoes, Kayaks and Rowing Craft, the world's largest collection of water craft. He is a Fellow of Explorers International and a recipient of the Government of Canada Centenary Medal and the Ontario Bicentennial Medal. Since retiring from the University in 1987, Wipper has served as President of the Royal Life Saving Society of Canada and National Director of the Duke of Edinburgh Awards in Canada.

As captain of the wrestling team, Kirk was undefeated in individual competition and helped the Blues win three league championships. He later served as coach for six seasons, and in 1991 was inducted into the U of T Sports Hall of Fame for his successes on the mat.

Kirk joined the School of Physical and Health Education in 1950, where he was professor until his retirement in 1987. An outstanding leader in outdoor education, Kirk developed and led the outdoor projects portion of the BPHE curriculum for many years. He was owner of Camp Kandalore, the original site for ODP camp. Kirk also served as a supervisor for rugby and track and field, coach of the Blues cross country team, and chair of the Athletics Council from 1983 to 1987. He received the Loudon Award (1987) and the Arbor Award (2002) for service to the University.

Recognized as a pioneer in the development of outdoor education in Canada, Kirk founded the Kanawa International Museum of Canoes, Kayaks and Rowing Craft in 1965, creating the world’s largest collection of watercraft. Among his other many awards over the years, Kirk received the Order of Canada in 2002 for his life’s work. The Kirk A. Wipper Award was established at U of T in 1990 to honour outstanding students who demonstrate leadership, a willingness to help others and enthusiastic involvement in the outdoor projects.

Best known for his passion for the natural environment, Kirk fostered a love of physical activity in everyone he met – colleagues, friends and students like.

For more information about the Kirk A. Wipper Award and how to donate, please contact Masha Sidorova."

You are invited to sign up for a free Wikipedia account and add your story about Kirk Wipper on wikipedia.org

Add Your Story About Kirk to this page

You are invited to add or revise your tribute to Kirk Wipper on David Spencer's Education Paragon here.